About Write From Medieval History Level 2:


Brookdale House is an on-line company were educational resources are published. Their curriculum is designed for children across all grade levels.

Medieval History was divided into 4 sections: short stories, text excerpts from primary source documents, poetry, and cultural tales. "For Chapter 1, short stories that give insight into people, places, and events during medieval times have been selected." Chapter 2 contained historical essays reflecting medieval philosophy and history. The next section contained poetry from and about the medieval times. The final chapter, contained folk tales.

Following every reading section, the student would find an opportunity to summarize the story and 3 hand writing practices. In Medieval History Level 2 Cursive, the child would have written the copywork in cursive. Some of the other volumes would provide the copywork in manuscript.

The appendix provided two models for dictation. The first option provided the same writing sample as the one found in the copywork model which followed each reading selection. The second option, is a section from the reading.

Currently, my daughter is learning about influential individuals that lived during the Medieval Times. This is why I selected to review the book "Write From Medieval History Level 2" which covers medieval history from 400 AD through 1600 AD. When she was learning about Christopher Columbus, I was able to incorporate the chapter in this volume about Christopher Columbus. Since the chapter is pretty long and she is only 7, her and I took turns reading a page once a day. While reading, she learned about the 3 ships that were involved in the exploration. She created the 3 ships La Nina, La Pinta, y (and), La Santa Maria out of cardboard. While we were creating the ships, I had music from Spain playing in the background. We also talked about Spain's involvement in providing the financial support. I took out her interactive globe and showed her where Spain and Italy are located (Christopher Columbus was from Italy.). I was also able to show her all of the countries that Christopher Columbus discovered. She also wrote an acrostic poem about Christopher Columbus. And she drew a picture of Spain's flag and colored it. 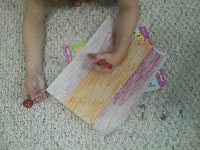 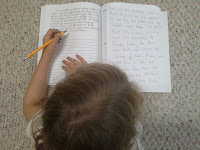 Continuing our study of medieval times, I read the cultural tale "A Tale of a Penny." This story is about an emperor whose porter was really intelligent. He asked the emperor if he may govern the city for a single month. The attendant told the emperor that he would tax individuals that entered the city according to their disabilities. The more defects the person would have, the more he would be taxed. One day a hunchbacked man wanted to enter the city. When the attendant notice his defects, he asked the hunchback for payment. The hunchback refused to pay the fee. The ending of the story: "Thus, a fellow unjustly refusing to pay a rightful demand of one penny, was necessitated, much against his inclination, to pay five."

There were a few words used in the story that my daughter did not know what they meant. This gave me the opportunity to help her find the definitions to these words.

With this tale, I was able to talk to my 7 year old about people with disabilities. And how God created everyone equally and loves everyone dearly. He does not look at the outside appearance but our hearts.


We loved "Write From Medieval History Level 2" and we would recommend it.

I have been given this product free of charge for review purposes.