The Transformation of an Exotic Dancer 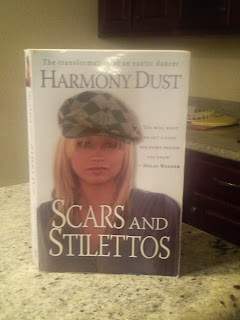 A few months ago, I attended a Bible study group and bumped into a lady I had not seen in a while. After the group, she walked up to me and said that she had prayed about who to give this book to. (Apparently, the book that she handed to me had been given to her a while back. She had finished reading it and wanted to pass it down to someone else.) I took the book and looked at the cover. What caught my eyes were the words "exotic dancer."I continued to read the cover and noticed that the book was titled "Scars and Stilettos." My friend told me that the book was about a former stripper who became a Christian. "Hmmm, something I will definitely read" I said to her.

I really love reading non fiction books. Especially the books that speak about God's unconditional love for a wretched world. I started reading it and I could not put it down. At times I was really heart broken for this little girl named Harmony. At the age of 3 she was exposed to pornography. Later on in life, she was raped by men in her life. When she was about 19, she ended up becoming a stripper named Monique. Her life was wrapped up in sexuality. It was what she knew. It was what she had become.

Then she met a young lady that attended church. They began a friendship. At times this friend invited her to church. At first, Harmony refused to go. Her friend never gave up on her. When Harmony would refuse to attend church, her friend would ask if she wanted to go have coffee instead. One day, Harmony accepted her friend's invitation. She attended church and Jesus captured her heart. He looked beyond her current job as an exotic dancer. He looked beyond her past. He just saw His child and He was IN LOVE with what He saw.

I really LOVED reading this book. It was such a great reminder of how merciful my Savior is. He meets us were we are and captures our hearts. He romances us with His unconditional love. He embraces us and tells us we are His treasured possessions.

What an amazing God I serve. He sees beyond my wretched past and just sees His beautiful masterpiece.


Psalm 139: 13-15
13 For you created my inmost being;
you knit me together in my mother’s womb.
14 I praise you because I am fearfully and wonderfully made;
your works are wonderful,
I know that full well.
15 My frame was not hidden from you
when I was made in the secret place,
when I was woven together in the depths of the earth.
16 Your eyes saw my unformed body;
all the days ordained for me were written in your book
before one of them came to be.

Isaiah 54:10
Though the mountains be shaken
and the hills be removed,
yet my unfailing love for you will not be shaken
nor my covenant of peace be removed,”
says the Lord, who has compassion on you.

Psalm 45:11
Let the king be enthralled by your beauty;
honor him, for he is your lord.
Posted by Unknown at 5:26 PM