Yesterday, my daughter and I (Yes, homeschool parents learn as well.) learned about the Medieval Times. We discussed the early monks of western Europe. We read about the monks who were leaders of the church in Rome. She learned that the monks lived together in special buildings called monasteries and they went to church eight times a day. During this time, they would pray and worship God. Monks also spent a large part of everyday reading the Bible. Many of the monks would work all day in special rooms called scriptoriums. In these rooms, they would make copies of the Bible and other important books. The monks started using a special paper called parchment out of animal skin.

They would carefully decorate the pages of the books with beautiful colors which I'm sure was pretty time consuming. 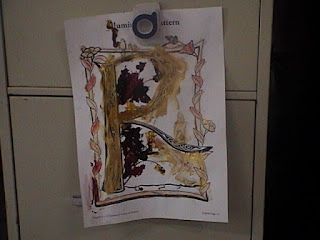 She really enjoyed learning about monks and Illumination Manuscript.